As was mentioned in the previous subsection, solar flares would have been more energetic and would have occurred with greater frequency during a superwave event due to the accretion of nebular material by the Sun. Increased solar flare activity in turn would have produced substantial disturbances of the Earth's magnetic field, possibly even causing geomagnetic excursions and reversals. The means by which this could occur may be understood as follows.

Geomagnetic storms are known to occur several days after the appearance of a large solar flare, at a time when low and high energy particles from the flare are arriving in the Earth's vicinity. The first phase of the storm usually involves a sudden increase in the strength of the geomagnetic field, a phenomenon known as sudden commencement. This event typically lasts about 5 minutes and involves about a 0.1% increase in field strength. This is believed to be due to compression of the Earth's magnetosphere by solar-flare hydromagnetic blast wave consisting of an enhanced density of solar wind particles (Piddington, 1969, pp. 105, 118). The Earth's magnetopause would become thrust forward and compressed by the incident blast wave in much the same way that the heliopause sheath would become compressed by the arrival of a burst of Galactic cosmic ray electrons.

Sudden commencement is usually followed by a temporary decrease in geomagnetic field strength know as the main phase decrease. This period of decreased field strength, which may last for several days, is believed to be caused by solar flare cosmic rays trapped in spiral orbits around the Earth's magnetic field lines. These cosmic rays would form a storm-time radiation belt similar in nature to the Van Allen radiation belts which girdle our planet. Singer (1957) has suggested that such magnetically trapped particles would drift in an equatorial direction, westward for protons and eastward for electrons; see Figure 3.19. As a result, the motion of these particles would produce a ring current which in turn would generate a magnetic field opposed to the Earth's dipole field. The theory of this phenomenon has been more completely worked out by Dessler and Parker (1959) and others. Main phase decreases as large as 5 X 10-3 gauss (i.e., about 1% of the Earth's surface field intensity) are known to be produced by major solar flares, whose peak energy intensity can temporarily reach 100 times the intensity of the present cosmic ray background. It is believed that during such an event the Earth intercepts total cosmic ray energies in the range of 1022 - 1024 ergs, possibly supplied through the Earth's magnetotail plasma sheet (Piddington, 1969, pp. 180-181). 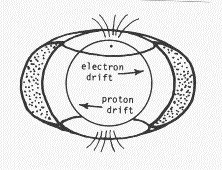 Suppose that during the proposed period of solar chromospheric activation a solar flare were to occur that was 100 times more intense than the most energetic solar flare observed during the past few decades, of a size typical of flares observed in T Tauri stars. Theoretical considerations show that the amplitude of the main phase decrease is proportional to the total particle energy in the radiation belt (Piddington, p. 180), and hence is roughly proportional to the initial magnitude of the solar flare. Thus ring current magnetic fields 100 times stronger than those thus far observed could conceivably occur, the applied opposed field reaching such a high intensity that it would essentially neutralize the Earth's dipole field.*

It is difficult to say what would happen when the intensity of the ring current field exceeded that of the geomagnetic field. Very likely the ring current field lines would close to form a doughnut-shaped field configuration having a symmetry axis that passed through the Earth's geomagnetic axis. The net field at the Earth's surface would then be reduced in intensity or even reversed in direction by the dominant ring current field. Cosmic rays would have difficulty escaping from their torroidal magnetic bottle since to do so they would have to slowly diffuse perpendicular to the direction of the field lines.

Such "field-reversed ion rings" have been created in the laboratory by using high-powered pulsed ion beams to inject large quantities of charged particles into an applied magnetic field (Golden et al., 1981). It is found that when the self-field generated by the ions exceeds the intensity of the applied magnetic field, a torroidal field-reversed configuration develops with a net reversed field in the interior of the particle ring. Field reversed ion rings are currently being researched as a means of confining plasmas for use in thermonuclear fusion reactors. However, they may also provide useful insights into the behavior of planetary fields during episodes of intense solar flare ion bombardment.

Whether the proposed ring current field was actually able to reverse the magnetic dynamo hypothesized to be present at the Earth's core would depend on a number of factors, such as the viscosity of the Earth's liquid interior and the momentum tied up in its motion. Under frictionless conditions a change in the dynamo's alignment would ultimately occur provided that sufficient time were allowed for the dynamo's inertia to be overcome.

The trajectory that the net magnetic field (ring current field) plus geomagnetic dynamo field) would follow is another question that must be considered. It is very likely that the local interplanetary field would play an important role. For example, the interplanetary magnetic field is known to reach peak strengths of 4 X 10-4 gauss during solar flare events (Brandt, 1970, p. 131). During mega-solar-flares associated with a solar T Tauri phase, temporary field strengths in the range of 10-3 - 10-2 gauss could be expected. The interplanetary field is observed to be oriented in the plane of the ecliptic in a spiral pattern. Consequently, if this ambient field were to cause a reorientation of the net field pattern, the virtual geomagnetic pole would probably drift to within  ±23° of the Earth's equator. Such an orientation appears to have temporarily occurred around 12,400 varve years BP [14,200 calendar years BP]; see Chapter 7 (Subsection 7.2.3).

As the intensity of the storm-time radiation belts decreased and the ring current field subsided, the geomagnetic poles would be free to drift away from their metastable equatorial position, taking either their former orientation, or a reversed polarity position. If the reversed position were attained, then the geomagnetic field would have to wait for another solar-cosmic event for an opportunity to reverse once again and attain normal polarity.

Uffen (1963) has proposed that the Earth's core dynamo is inherently unstable and subject to spontaneous reversals. Thus he seeks a purely terrestrial explanation for this phenomenon. However, there are those who point out that the Earth's core dynamo would not be able to self-reverse, but would require the assistance of a sudden external disturbance (Bucha, 1973; after Bullard, 1971). I would add that since the hypothesized dynamo mechanism is not well understood, attempts to attribute flips to instabilities in this not-well-understood mechanism should be regarded as being speculative. Moreover, such a mechanism alone would not be able to account for the observation that geomagnetic flips coincide with extinction episodes; see Chapter 11 (Subsection 11.2.1).

The theory of radiation belt currents, on the other hand, is well developed (Singer, 1957; Dessler and Parker, 1959) and the proposal that cosmic ray outbursts (e.g., from the Sun) cause disturbances to the Earth's magnetic field is well established on observational grounds. My proposal that large solar flare outbursts associated with the passage of a superwave would cause disturbances to the Earth's magnetic field simply involves a quantitative scaling up of a phenomenon that is already well understood. The possibility that a ring current magnetic field could be responsible for causing geomagnetic polarity reversals though, to my knowledge, has not been previously suggested. Consequently, this may be regarded as an original contribution of this study.

It is also possible that a passing energetic superwave, a transit of the heliopause sheath, or a nearby supernova explosion could also supply sufficiently large quantities of cosmic rays to the radiation belts to cause a field reversal. While these may be reasonable mechanisms for explaining many of the reversals in the sedimentary record, they must be ruled out as causes for the Late Pleistocene reversals since they would have produced an inordinately large increase in terrestrial C-14 levels, which is not observed.

*Today it is known that solar flare cosmic rays are expelled as "coronal mass ejections" and that a solar storm occurs when one such ejection happens to contact the Earth. Consequently, in this geomagnetism theory I was essentially proposing that geomagnetic flips are induced by major coronal-mass-ejection Earth-contact events (see Earth Under Fire). Although the notion of solar coronal mass ejections was not current at that time, in Chapter 4 of my dissertation I presented this concept as a way of accounting for the glazing of lunar rocks. PAL 1/29/99

Bucha, V. "The continuous pattern of variation of the geomagnetic field in the Quaternary and their causes." Studia Geophysica et Geodaetica. 17 (1973): 218.